A Voice for Members
by David Klessa

We have been members of Land for Wildlife for nearly 8 years and remain committed to the broad objectives of ‘caring for country’ (aspects of which I shall return to later in this article). Having the sign on our gate is not so much a badge of honour, although we feel privileged to be members; rather, for us at least, it is a statement that we consider wildlife conservation and the protection of habitat to be a responsibility we have in choosing rural residency and lifestyle in the Top End. Not that we would have taken our responsibility any differently had we not joined Land for Wildlife; weed eradication, toad control and general upkeep would have continued as before but shared experience and the enrichment it brings by being members would have been missing.

Retirement brings the advantage of more time at home to observe but, paradoxically it seems, less time for upkeep (falling energy levels!). We certainly saw new visitors to our place this year and our bird population was more diverse and greater (with the notable exception of magpie geese). Over the last 10 years or so, a section of our property has hosted hundreds of magpie geese generally from late October until late December which night roost in the tops of mature E.tetradonta and provide the safest spots. Watching them land in flocks at dusk is fun because it resembles a car dodgem show because it inevitably leads to bump offs and much noise. But there were much fewer this year and they left in late November. With the wetter start to build-up this year on top of our third highest annual rainfall last year, I suspect the floodplains have provided an earlier yield of wild rice and Eleocharis for grazing.

Amongst the newcomers was a pair of raptors and juvenile (grey wing feathers). One of these magnificent adults is shown in Photo 1 perched on our upstairs verandah rail. We think it is a Collared Sparrowhawk -can anyone confirm?

We have also been delighted to have a nesting pair of Rainbow Pittas for the first time. They seem to like the area around our pool which is densely shaded and has copious leaf litter under the tree canopy where they have built two nests (Photo 2). It’s fun watching them hopping about collect sticks and leaves for nesting with the size of the bundle in their beaks often dwarfing their heads – or is it only the male that collects and builds the nest? – can anyone help?

At the bottom of our drive, last month, we saw the arrival of a flock of around 20 Crimson Finches which spent time alternating between pandanus trees and a conveniently located puddle that served as a bird bath. We haven’t seen them for some years, so it was pleasing to have them visit us.
Weeds
Dealing with weeds at near ground level might be relatively straight-forward –  albeit hard work and, at times, back-breaking but what if the weed dwarfs all other surrounding trees rising to well over 30 m and throws out suckers which extend as far as 50-100 m from the parent tree. Yes, sounds like a nightmare and it has been with the presence of an African Tulip tree which was planted before we bought our property 20 years ago. 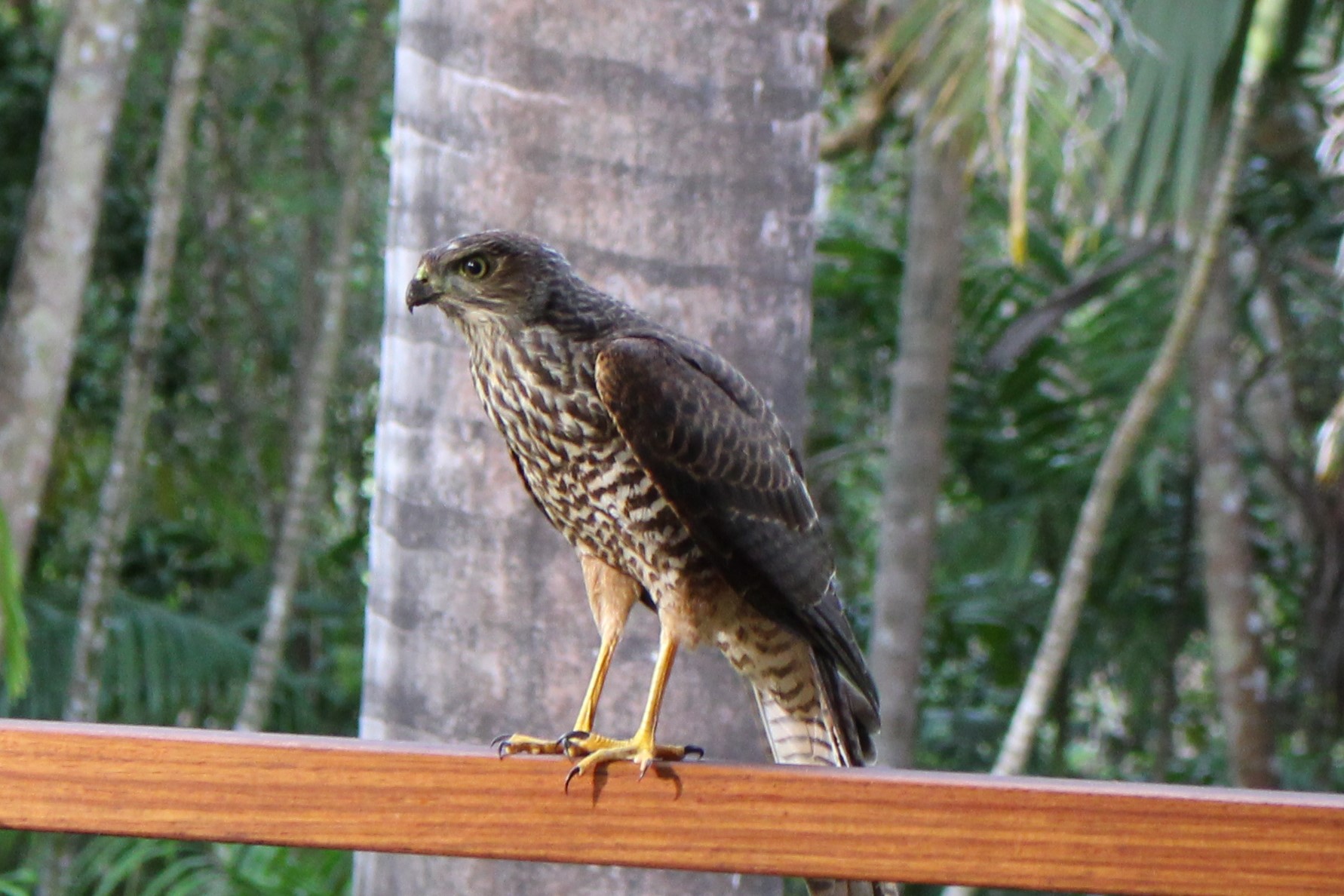 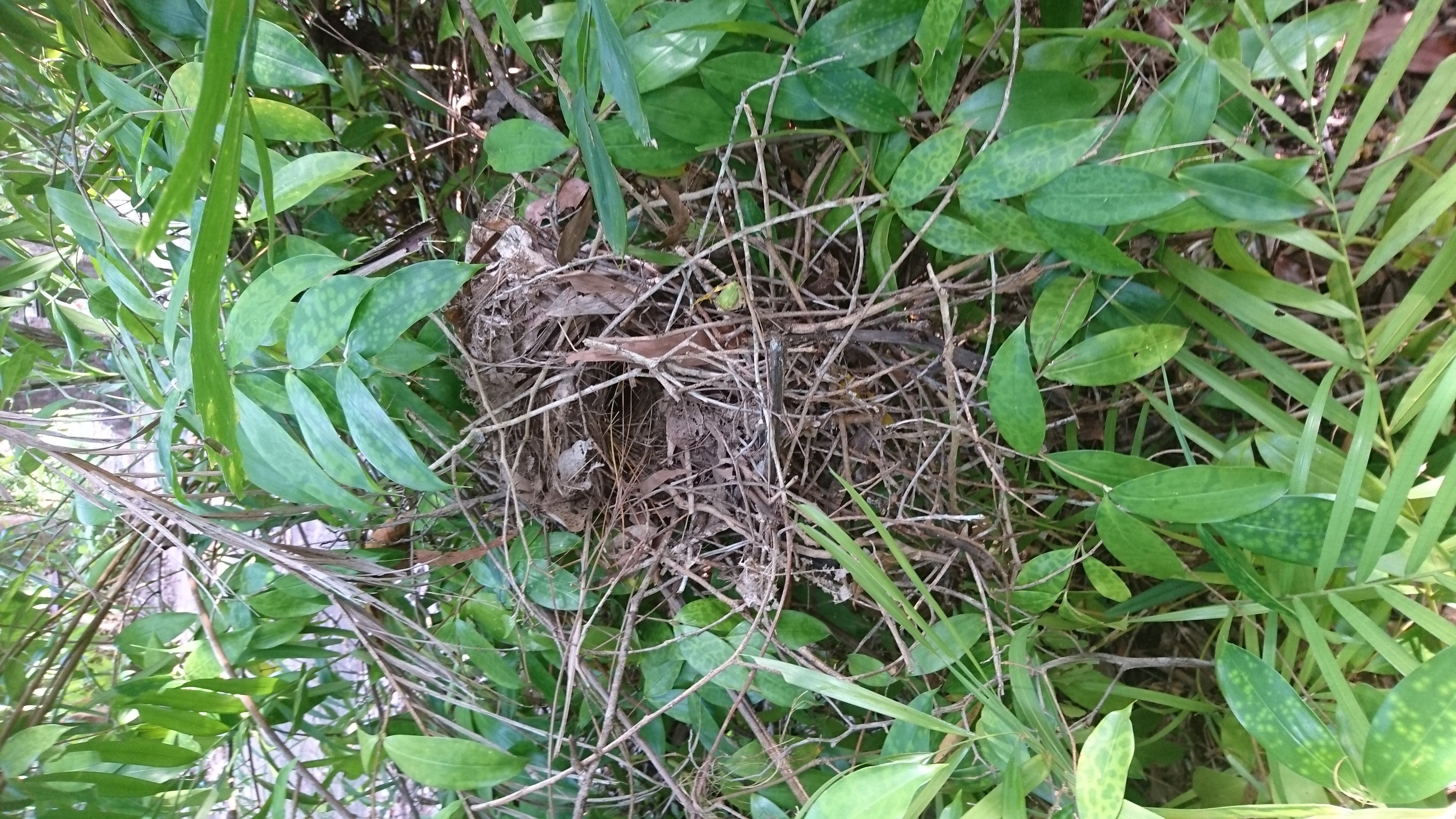 Not only does it have an incredibly high growth rate in the tropics (ie of up to 5cm in trunk diameter/year), their wood is spongey, weak, and prone to break in storms. There are also reports that the pollen of their attractive flowers is poisonous to wild bees. Under Queensland legislation (Biosecurity Act, 2014) the African Tulip tree is classed as a restricted invasive plant. If it has not been banned for sale or planting in the NT, it ought to be.
So, this year with time on her hands, we decided to act and were spurned on by meeting the tree surgeons who so aptly demonstrated their skills at the nesting box programme organised by Emma and Land for Wildlife earlier this year. The tree was duly felled in June and it was great to watch these guys working with crampons, rope, and chainsaws. All the wood was retained on site and placed to provide habitat/refuges for wildlife. The trunk was sawn to near ground-level and treated with glyphosate which has been successful in killing the root system of the parent tree. Before and after shots are shown in Photos 3 & 4. 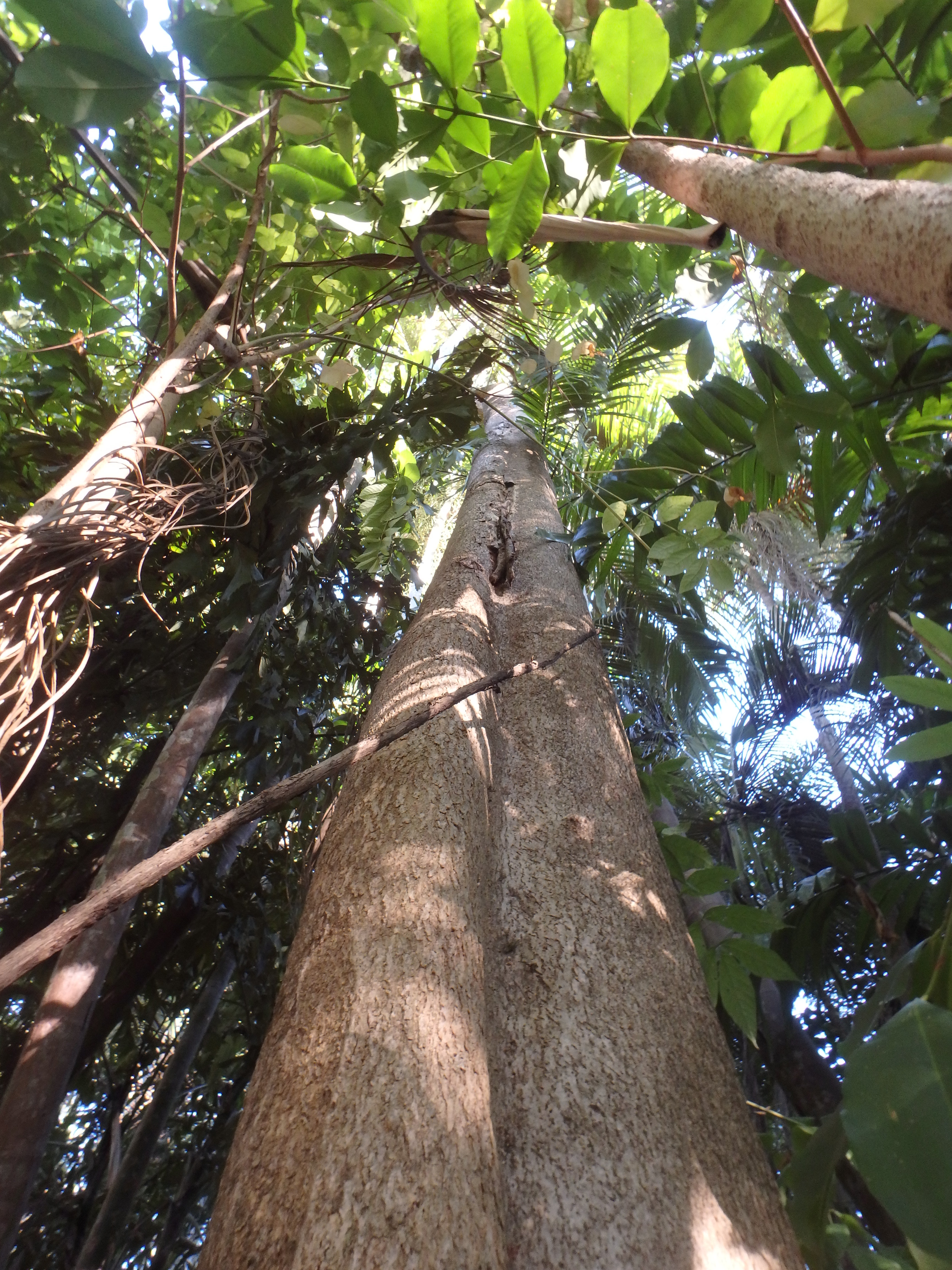 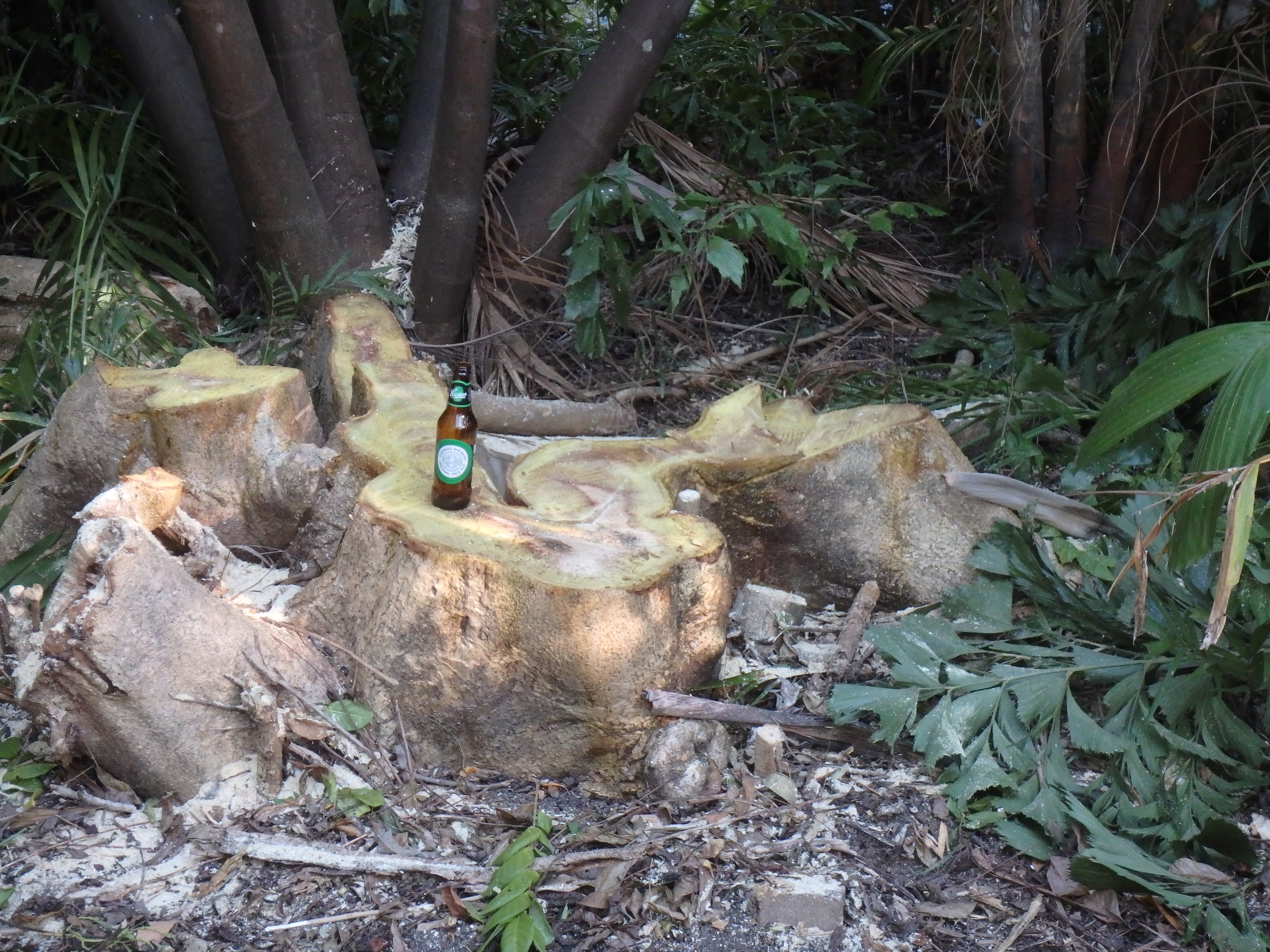 A Voice for Wildlife and Self-Help

I am sure I share the sentiments of Land for Wildlife members when I say that I was disappointed to learn about how devastating the fires around the Berry Springs/Darwin River areas were this year and how hard work in establishing and conserving habitat (and nest boxes) can be so easily destroyed and undermined by repeated annual hot fires. It is unacceptable that some members experienced damage to their properties and wildlife conservation by trespass. Likewise, it is intolerable that some cat owners should choose to allow their pets to roam freely with the resulting devastation to wildlife everywhere but especially on neighbouring Land for Wildlifeproperties. Lack of weed control by some land owners continues to cause problems to some of us but also to the greater environment.

I do not believe ‘the voice’ in support of wildlife conservation and everything associated with good decision making in land use planning, and sustainable practices in land management, is strong enough. However, I want to quickly add that ‘the voice’ should not come from Land for Wildlife itself, but from us……it needs to be ‘our voice’ as individuals, as an independent group, including non-members who also share our values and objectives. Land for Wildlife, as an organisation relying upon government funding, cannot do that job for us, and must not.
I have always been struck by how successful other interest groups such as the fishos and hunters have been, and continue to be, in putting forward their views and in fighting issues that might affect their lifestyles in pursuit of their interests. They gain media time and attention. We simply don’t.

So, I would like to propose a meeting of like minds, should they exist! I would be delighted to organise a meeting in February/March 2018 at which we might discuss the concept of self-help and its development, but I suggest we would need a quorum of at least 10 attendees to get the ball rolling. If you are interested, or simply want to comment, please send an email to humptydooer@hotmail.com marked ‘Self-help’ in the message title.

Have a great holiday, and all the best in the New Year.