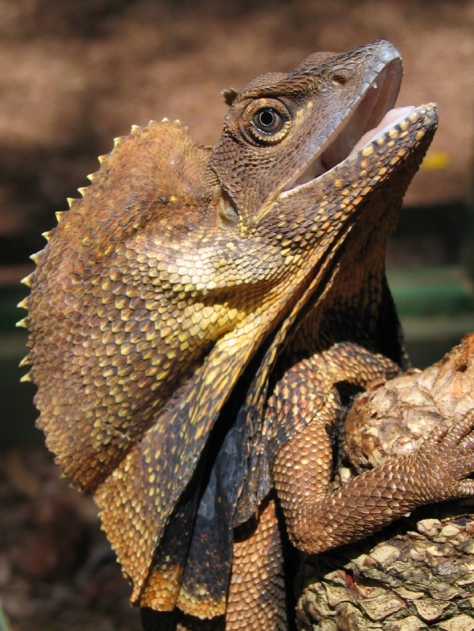 The Australian Frilled Lizard is one of our most remarkable lizard species with their showy frill that is used for defence and communication. It is also the animal logo for the Territory Wildlife Park.

The preferred habitat of this iconic Lizard is semi-arid grassy woodlands either open shrubby woodland or woodland with a tussock grass understorey.

“Frillies” as they are affectionately known are generally solitary and territorial. They spend a lot of their time in trees and will feed on spiders, cicadas and other tree dwelling insects.

They also come down to the ground to hunt for ants, small mammals, lizards and amphibians (they will eat small toads, which is lethal for them).

Frillies tend to stay up in trees during the dry season and are well camouflaged and less active in the cooler months.

During the build-up and wet season months as the temperature and humidity increases they become more visible as they actively display and seek mates to breed with.

Mating takes place around September with females laying 8-23 eggs in a hollow in the ground in November.

The eggs are tiny and only weigh 3-5 grams. The tiny frilled hatchlings will emerge in February and are independent from the day they hatch. Hatching during the wet season is the perfect time for baby Frillies as there will be plenty of insects (food) available for them to catch.

The main predators for Frilled lizards are birds of prey (such as eagles, hawks and owls), snakes, bigger lizards, dogs and cats. The biggest threats to Frillies in the Top End are land clearing, habitat destruction, feral cats and Cane Toads.

As a Land for Wildlife member you can help our Frillies in the following ways:

Share what you know about Frillies with others and encourage them to also make their properties Frilly Friendly.