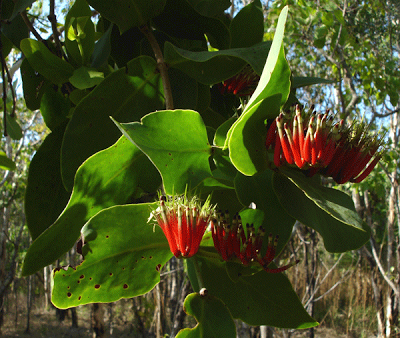 This festive time of year is a busy time not only for us, but also for the beautiful flowers that are in bloom during the holiday season. It always seems a bit obscure when you see snow covered cards, northern pine trees and log fires decorating shops and houses as we are either sweating it out or in the middle of a Tropical down pour here in the Top End. We do have some more appropriate and surprisingly parallel flora of those stemming from European traditions.

We are lucky enough to have our own native species of mistletoe (Amyema sanguineum var. pulchrum) that has stunning yellow-orange to red flowers and adds a burst of festive colour to the landscape. Australia has 90 species of mistletoe, the large majority of which are native. The arid-zone of the Northern Territory is home to 17 species, with 11 occurring in the Alice Springs region. Surprisingly, in Britain and Europe where the image of mistletoe was made iconic to that of Christmas, there is only one species! This semi-parasitic plant can be found in the canopy of several Eucalyptus host species and their flowers, fruit and nectar provide an important source of food for wildlife such as gliders, possums, insects and birds. The fire-breasted Mistletoe bird has evolved alongside this plant, feeding and digesting the berries while distributing the unharmed seed. The mistletoe’s distribution includes the Victoria River, Katherine and Gulf regions, Arnhem Land, Barkley Tablelands and Central Northern and Southern regions.